Hey everyone! I'm super excited to bring you this review, I finally got my hands on some black glitter! 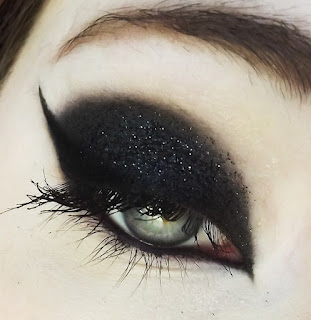 There's nothing a goth kid loves more than black, and nothing a makeup freak loves more than glitter, combine the two, and it's got my name written all over it.
Today, I got in the mail, a jar of Medusa's Makeup Glitter in 'Abracadabra' and pure, finely milled, black. I like this glitter because it is extremely fine, it can be layered x1000 to achieve whatever amount of sparkle you're looking for, from just a hint, to full on glitter-tastic. 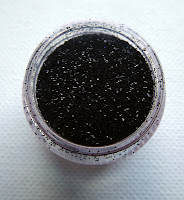 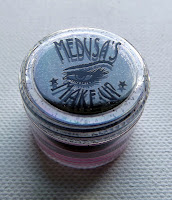 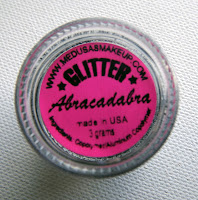 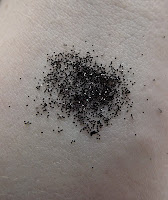 Each jar comes with 3 grams of product, and is made in the USA (my grandpa would be proud. xD). When I received my jar, it was literally filled to the BRIM with glitter, so there's no shortages of product here! When I placed my order, my package was shipped out later that same day! Although this is my first time using their products, I was impressed by the speed of their processing and shipping. Oh and did I mention that their products are PETA certified? I'm not a total freak for peta or anything, but it helps me rest easy knowing my makeup hasn't been rubbed in some poor creature's eyeballs.
Bottom line, I will definitely order from Medusa's Makeup again. I can't help buy eye up all those gorgeous products on their website!


***Disclaimer*** Products shown were sent to me by the company for the purpose of reviewing. However, complimentary products never receive special treatment, I review them just like I'd review something I bought myself. My opinions expressed here are purely my own, and are not influenced by any outside sources, nor do I represent any company.***
Posted by ToriBiohazard at 10:04 AM 1 comment:

The New Eyes of Concrete Minerals

A week or so ago, something amazing happened to me. I got an email, from a beloved indie makeup company, Concrete Minerals . I've posted about them plenty of times here, there, and everywhere! They're an amazing company, always thinking of their customers, and always looking to improve themselves. Upon receiving the email, I was slightly confused, seeing as I haven't ordered anything in a long while from them, so I opened it, and couldn't believe the words I was reading! The lovely ladies at Concrete Minerals LOVE my work, and offered me to be the new 'eyes' for their expansion to bigger, and better websites!
So basically, MY eyes will be the color swatches, for all of the eyeshadows they release on these websites. Shock, honor, and excitement! Along with that amazing news, they also sent me FULL SIZES of their colors I don't have, in order to complete the swatches. I've been working on the swatches for the colors I own, and today, I got my amazing Makeup Mail package from them! 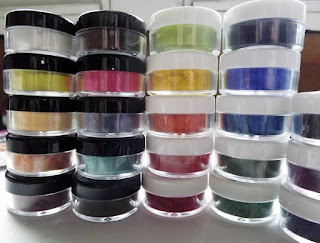 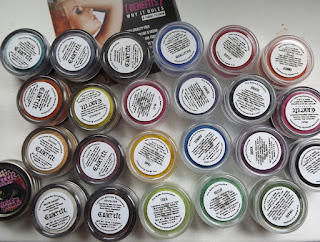 It really is an honor, a dream come true, to have an amazing company approach me, and ask me to be a part of something huge like this! First, Concrete Minerals, next, THE WORLD! I will have to do another post linking to to website my eyeballs will be debuting on, but until then, I'm going to be busy busy playing with all of this makeup!
Posted by ToriBiohazard at 11:52 AM 3 comments:

Hey everyone! I'm back again! After my last Ulta haul, they gave me tons of coupons, which (of course) could not be used online, I guess that only meant I had to go back! (Shame, right?) 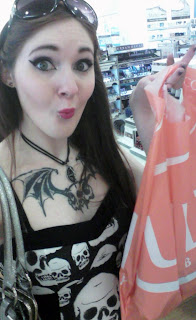 This time around, the 'haul' isn't nearly as big, as my budget, boyfriend, and bank account won't allow me to really purchase everything I want. (Even though I really, really need it. Sort of.) Anyways, take a look at some of the things I picked up this time around with my coupons!

My hair has had purple in it, underneath burgundy, for a while now. Last brand I tried (some Sally's brand, can't remember!) Turned my hair lavender. It was supposed to be bright purple! Well, after a week of lavender, which I could live with, it has now turned grey where it's supposed to be purple. I've never tried Punky Colours before, but I've heard all good things. Will post a review after I use it!

Originally, I was just looking for a cuticle cream or oil, but I stumbled upon this little box of treasures, and it intrigued me immensely. This was a sample set from the company J.R. Watkins, I'd never heard of them before, but everything is natural, and looks cute! The set has quite a few things in it, so I figured I'd give it a shot. Two mini hand and body lotions, one in Aloe and Green Tea, the other in Mango, one mini Rejuvenating foot cream in Peppermint, two mini Hand Creams, one in Aloe and Green Tea, one in Lemon Cream, two Cuticle Salves, one in Lemon and one in Lavender, and one Peppermint Lip Balm. So far I've only tried the lip balm and cuticle salves, but everything smells lovely! Can't wait to try them!

Where has this polish been all of my life?! 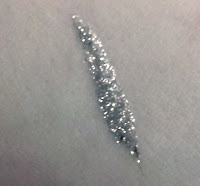 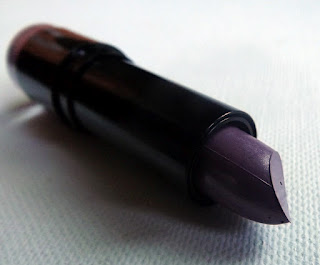 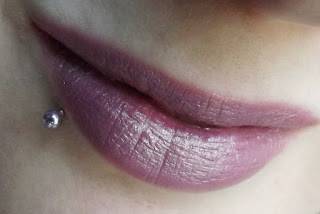 Well guys, that about sums it up for now. I can't wait to test and try some of these new products I picked up! My wallet won't allow my next haul to be for a very, veryy long time. (Booo) But in the meantime, that just gives time for even more exciting new things to come out!

Also, the mall I visited with the Ulta in it, had the most adorable kitten store. They had cats and kittens, roaming free and in cages, just chillin in the store, coming up to say 'hi!' and looking for lovins. If you don't know this by now, there are about three things that make my life bearable; Makeup, Cats, and Industrial Music. I probably spent as much time in there as I did in Ulta!

Posted by ToriBiohazard at 8:28 PM No comments:

So I FINALLY got the chance to take a roadtrip to an Ulta store! The closest one to me is about an hour and a half drive away, and I've never been there before! I had a huge wishlist, didn't end up getting EVERYTHING (although I could certainly spend hours, possibly days) in there! But, I still spent probably wayy too much money. Oh well, it was a trip right?! Anyways, I just got home, and I'm gonna swatch and give my first impressions on everything! So here we go! 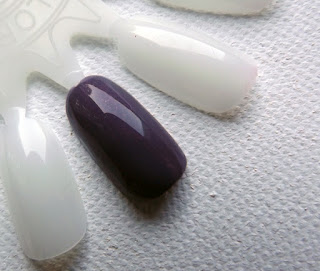 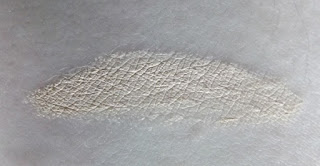 I hope this one lives up to the hype, I'm in the market desperately for an amazing concealer! 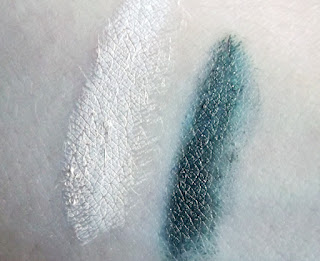 Milk is a staple color I am constantly hearing about, and finally had a chance to pick up! Sparkle Green was just too pretty to pass up. Almost reminds me of UD's Shadow pencil in 'Clinic', which I ADORE! NYX is only a bit less glittery. 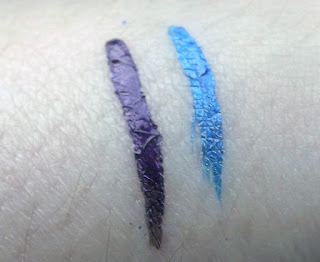 Been searching for some affordable colored liquid liners, I saw these online and knew I had to give them a shot! The blue reminds me so much of UD's Radium Liquid Liner. 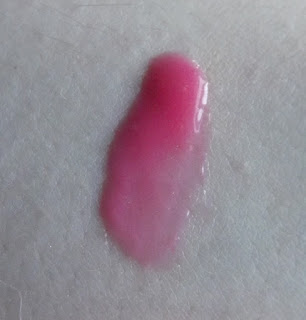 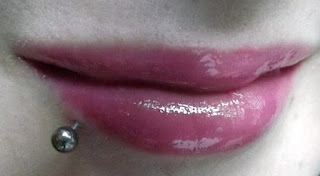 Minty! I've been lusting after these for forever, and I finally bit the bullet. I enjoy this one, I'd love to get more, however, as soon as I opened it to try it, the silver decorative part of the cap came loose and fell off! Nothing a little glue can't fix, but for $19, I'd like the packaging to at least stay intact. 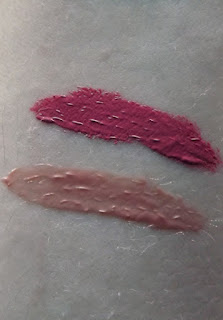 Loving the Lip cream! It's like a liquid lipstick. As for the lip plumper, it feels like I'm rubbing chili peppers on my lips! Even just doing this lip swatch burned sooo much. But I'm hoping I'll get used to it, or it fades quickly, since I didn't wear the swatch long.

(Not Pictured)
Urban Decay Eyeshadow in Minx.
I couldn't get a good picture or swatch of this color, it's just such a unique bluish gold, everything looked like poo. So I decided not to include a picture. However it's the last piece of my Ulta haul!

Overall I'm pretty excited to try out and play with everything I bought. With an unlimited budget, you KNOW I would've bought more! (Who wouldn't!?) But for now, gonna play with what I have, so I can plan out my next roadtrip!

Posted by ToriBiohazard at 5:56 PM 2 comments:

I'm planning a huge trip to Ulta soon. (We don't have one around where I live!) So I just purged my makeup collection of everything used up, possibly expired, or too gross to use!  Here's what I got rid of, and why. 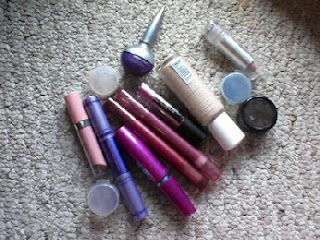 Well guys, that my makeup purge before the big trip to Ulta! I'll definitely be posting a haul blog once I return! I've already got my wishlist full of things I want to buy there!
Posted by ToriBiohazard at 10:35 AM No comments:

ToriBiohazard
Erie, Pennslyvania, United States
Hi everyone! I'm just your not-so-average creature of the night who absolutely loves all things art! I make my own jewelry which can be found and purchased on Etsy, and I absolutely love playing with makeup!